She is also a member of the EFPIA Patient Think Tank. She became Vice-Chair of EFGCP as of March 2017 and is keen to actively contribute to the work of EFGCP, primarily from the patient perspective. Lynne became the President of WFIP - World Federation for Incontinent Patients in January 2011.

Also until April 2016, chairperson of the ICP – Netherlands Interstitial Cystitis Patients’ Organization. More recently  she became a member of the ‘Core Board’ for one of the EIP – AHA Focus groups led by the University of Valencia, Spain.

Member of the PACT Steering Committee and also a member of the IMI project PARADIGM as patient engagement representative of EFGCP.

Lynne is co-chair of the European Health Coalition – a coalition of some 42 multi-stakeholder groups from all areas of healthcare, patient organizations, pharma and medical devices, academia and scientific institutions and others. 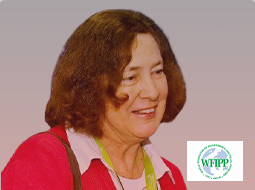 Follow us online to stay up to date about our conferences